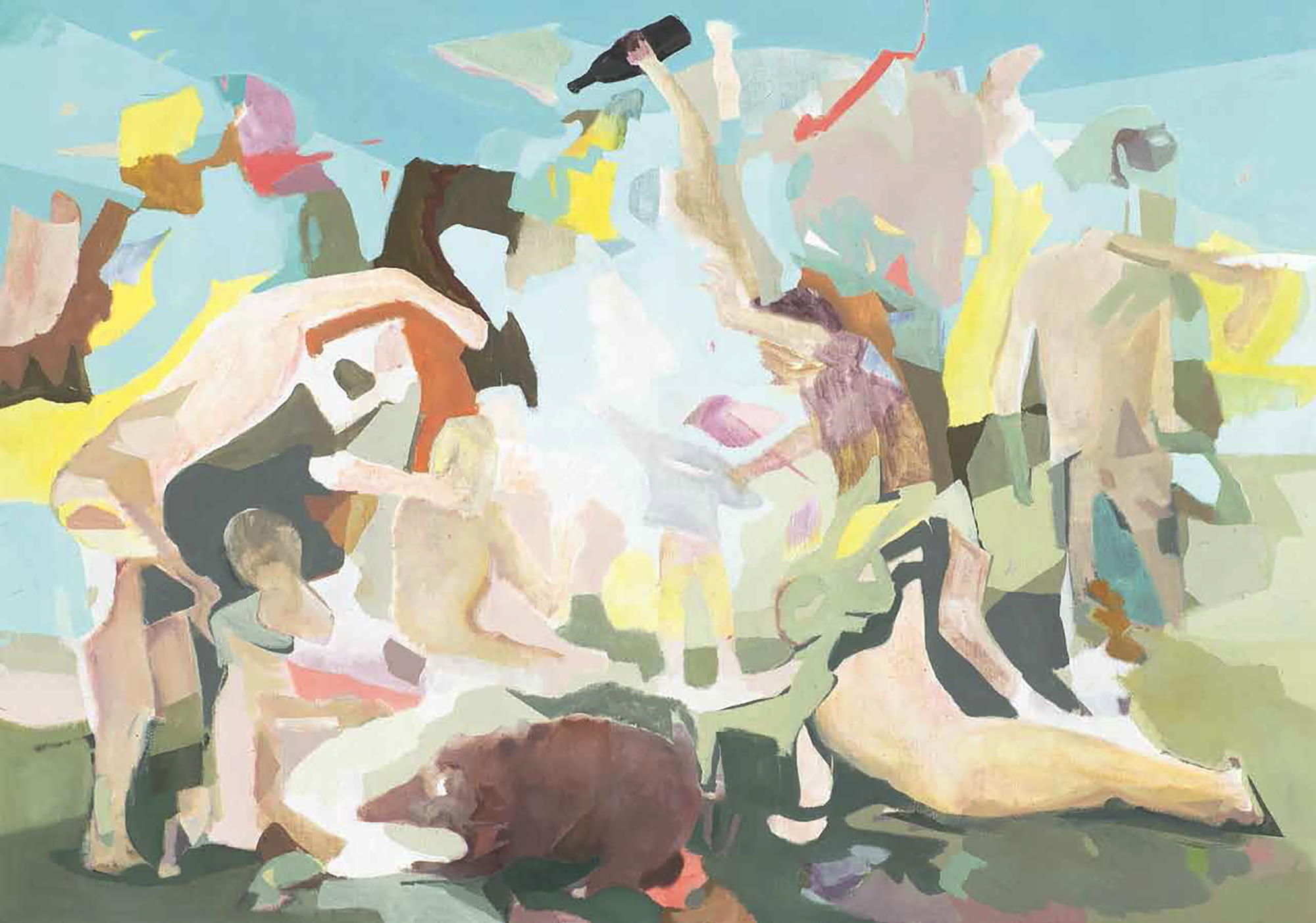 “Reflections of light on water, moving shadows, prismatic refractions, vortical rotations: Daniel Mohr’s works draw pivotal aesthetic impulses from phenomena that disrupt the unambiguous view of the world and its objects. The compositions of the Berlin-based painter, born in 1976, are themselves manifoldly disrupted. They are impacted by the very reflections, refractions, and rotations that the artist imports from the extra-pictorial into the intra-pictorial reality of his paintings, which seem to shatter into pieces before the beholders’ eyes. Mohr’s paintings are as evasive as the ephemeral play of light and shadow. They are fragmented, distorted, broken up into vertical strips and rotating circles.

Daniel Mohr draws from the repository of art history, from moments of reality that he has captured in photographic images, in which the mech- anisms of perception are condensed and implicitly visualized by their disruption and mobilization. In his painted collages based on visual ob- servations, found and fragmented slivers of information, he investigates the activity of seeing as well as what is being seen. The “theoretical foundation of personal action” encompasses the mathematical permutative structures of Minimal Music, including the deviations immanent to it, the transposition of the technical characteristics of digital image struc- tures and “photographic effects” into painting, as well as the optical experiments of the Baroque era, the aesthetic issues of the Bauhaus artists, particularly Paul Klee’s theories on form and color, and Henri Matisse’s cut-out technique of the gouaches découpés, up to Johann Wolfgang Goethe’s analysis of the nature and perception of colors in the latter’s holistic Theory of Colors (1810).

The visual “phase shifting” or interferences not only bring about shifts in the paintings themselves and thus in the perception of the viewers, whose reading of the works is briefly halted, detoured, and led into new terrains and levels of meaning. In the parallelism of events, the chronology of time also no longer applies. Time keeps bouncing back onto itself, remaining in a state of suspension balancing between progression, rebound, and endless loop: “in a permanent movement of transcendence and construction of boundaries, of dissolving and setting up boundaries, of despatialization,“ which is in compliance with the „hybrid spaces” that comprise our experience of the world with its “vagabonding boundaries” and seamless transitions from real to virtual, and back again.“ (Text: Belinda Grace Gardner)

On the occasion of the exhibition a catalogue is published at Kerber Verlag.