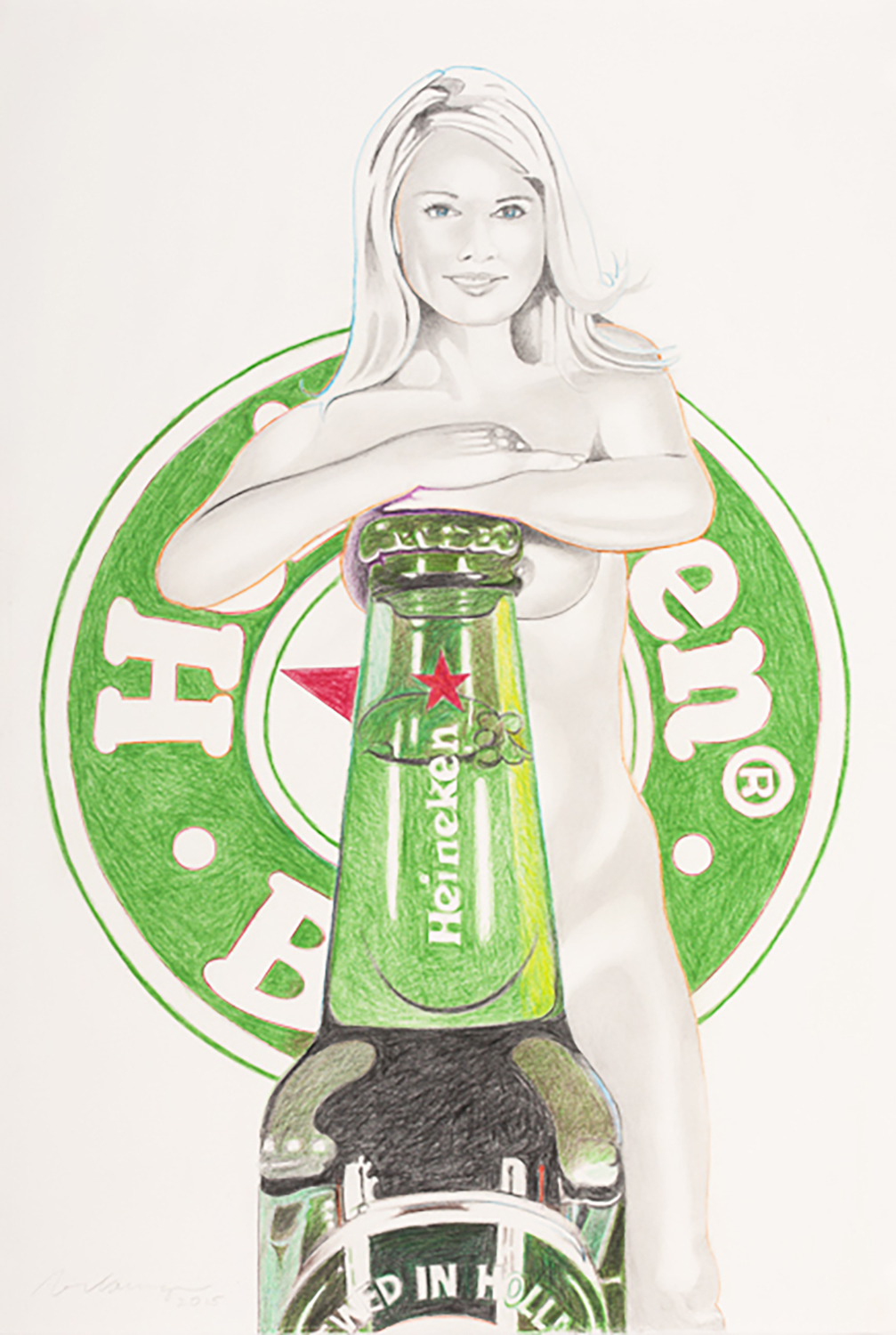 Pencil and color pencil on paper

LEVY Gallery is pleased to present the exhibition “Superman at the Supermarket” to pay homage to the important Pop artist Mel Ramos (*24th July, 1935) on the occasion of his 80th birthday.

Mel Ramos is considered one of the main representatives of Popart. Beginning in 1963 he develops a passion for a tantalizing and seductive visual language. Beauty queens and Hollywood stars in combination with products from the consumer world in typical pop colors are inhabiting his paintings. Similar to the advertising aesthetics from magazines he arranges women’s bodies in erotic-almost vulgar-positions on consumer goods and makes the advertising industry’s permanent topic “sex sells” a subject of discussion. Despite the clarity of his composition and his balanced forms, Mel Ramos–like many artists of Pop Art–works with double meaning, his works are formulations of an erotic fantasy that illustrates a fundamental pattern of marketing strategies in advertising. Thus, Ramos exposes the advertising industry’s strategies by exhibiting them as ironic visual quotations.

This solo show focuses on Mel Ramos new series of drawings with the topic Pin-ups and consumer goods. A supermarket will be constructed at the gallery, where all the consumer products, which are depicted in his paintings, are displayed. The idea of an “artist`s shop”, where “high” and “low culture” fuse, is rooted in Popart-traditions of the 1960s. The show “American Supermarket” at Bianchini Gallery in New York in 1964 celebrated the buying and selling of culture as an happening and deliberately blurred the lines between art and goods, between spectator and consumer. This fetish around objects, its masterly visualization and re-contextualization, is fundamental for the oeuvre of Mel Ramos to the present day.

In conjunction with the exhibition a catalogue (Ger.-Engl.) at Kerber Publishers is publicized including an essay by Konstantin Jacoby. Furthermore, an artist book titled “The Mel Ramos Pin-Up-Product-Paintings-Picture-Book” will be released in a limited edition.